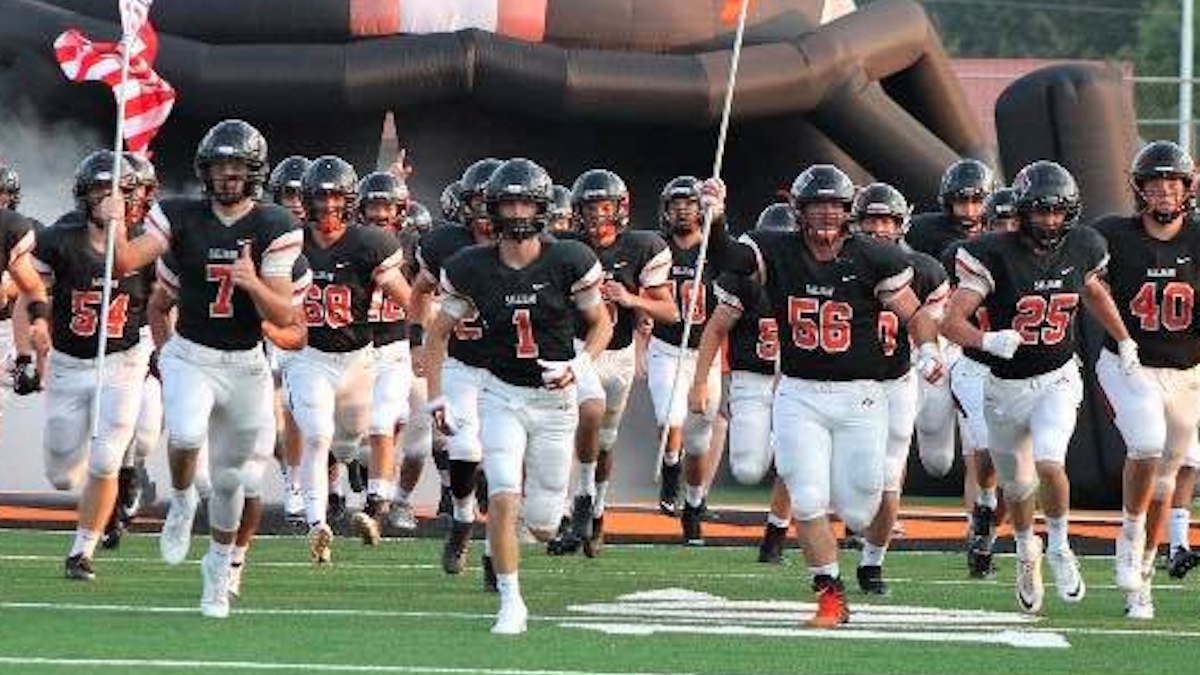 Wide receiver Ryle Scavo caught eight passes for 171 yards and three touchdowns in the Black Diamonds 39-34 win over Ft. Gibson. Sallisaw won for the 18th time in 19 games against Muldrow, downing the Bulldogs 42-14 on October 2nd.

The Black Diamonds enter the 2021 season with an air of confidence while filling key positions left vacant by graduation. The Orange and Black offensive unit welcomes eight starters including a productive group of receivers led by Rylee Scavo (6-0, 195, Sr.) who grabbed 40 catches for 675 yards and six scores in 2020 along with Cole Stephens (6-0, 180, So.) who snared 15 receptions and Brock Streun (6-2, 180, So.). Another game changer back on the field for 2021 as a go-to-guy will be Ty McHenry (6-4, 250, Sr.). A four-year playmaker, the bullish tight end grabbed 15 receptions averaging 12.2 yards per catch while scoring five touchdowns last season. The still to be resolved question is who will the Black Diamonds use at quarterback where Parker Jackson (6-0, 185, Jr.) along with Scavo or Streun continue to battle for the approval of head coach Randon Lowe.  Size and strength remains a plus in the offensive line where Jordan Decker (6-2, 300, Sr.) enters his third season as a starter along with Matt Echols (6-4, 260, Sr.). The dominating duo in the trench combined for 36 pancake blocks last season. “We’ll do what we do best,” explained Lowe who enters his fourth year coaching his alma mater. “We pride ourselves in being disciplined to take what the defense gives us but also aggressive and take our shots down the field.”

Toughness is more than just a catchy motto for Sallisaw’s 3-4 defensive alignment that returns six starters this fall. The front three is solid led by defensive end Ty McHenry, who totaled 63 tackles include 23 for loss and eight sacks and will require double team assignments to slow him down. He’ll be joined joined by nose guard Jordan Decker and Caleb Cowan (6-1, 245, Jr.) at defensive end.  Linebacker strength has been a Sallisaw tradition and Rylee Scavo whose durability and toughness produced 77 tackles including four fumble recoveries will lead the charge. Experienced and ready to take their efforts to a higher level will be Cole Stephens and Parker Jackson. Both safeties charted 63 tackles with Jackson recording six for loss.

“Our defensive game plan is to be the most physical unit on the field and maintain pursuit to the football on every snap,” Lowe added. “This team knows that to be successful requires hard work in practice as well as games. We’ve got some experienced playmakers and some young kids with really good ability that altogether give us a chance to win. We’re taking nothing for granted, just go to work every day, compete at the highest level and see what happens.”