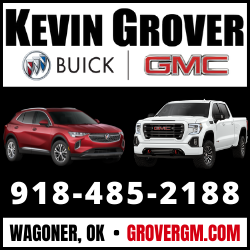 Wagoner has reached double digits in wins for eleven consecutive seasons. The Bulldogs own a record of 132-13 since 2008 with five state championships.

The Bulldogs defense was stiffling on the way to a perfect 14-0 mark and state championship. Wagoner shutout six opponents and allowed no more than 14 points in any single game.

The Wagoner Bulldogs steamrolled through Class 4A en route to a fourth state title in seven seasons. They outscored their opponents 630-87 with six shutouts. Bulldogs head coach, Dale Condict, says that while his team was hit hard by graduation, he expects to have players step up and fill the positions. “We lost 20 of our starting 22 positions from last season,” he said. “We felt like a fitting slogan for our team is ‘Find A Way.’ We understand the expectations and embrace the challenge.” There will be a new face leading the Bulldog offense this season as Gabe Rodriguez (5-9, 160, Jr.) steps up to take the reins. Helping to anchor down the offensive line and give Rodriguez protection will be Jamal Riggs (5-10, 265, Sr.) and Nikko Jones (6-3, 295, Sr.). After losing a number of offensive playmakers, Condict’s squad will need someone to step up and fill those shoes. Fred Watson (6-0, 225, Sr.), Marquez Barnett (6-0, 175, Sr.), and Witt Edwards (6-6, 195, So.) should step up this season and give Wagoner enough offensive power to be a contender in Class 4A this season.

The Bulldog’s defense will have a lot of new faces this season. Having only two returning starters from last season’s team, the learning curve will have to be short if the Bulldogs want to defend their title. Returning to the defense are defensive lineman Fred Watson (6-0, 225, Sr.) and linebacker Gabe Goodnight (6-0, 228, Sr.). Watson (6-0, 225, Sr.) tallied 85 tackles, four sacks, three forced fumbles, and returned an interception for a touchdown last season, while Goodnight registered 78 tackles and one sack last season as starting linebacker. Both players will work hard to get to the quarterback and wreak havoc on the offense. Rodriguez will be playing on both sides of the ball, playing safety on defense. He will be joined by teammate Logan Sterling (5-10, 175, Sr.) and together they will work to lock down the secondary and take away the opponent’s passing game. Roman Garcia (6-2, 235, Jr.) was injured last season but is ready to get back out there at the nose guard position and attack. Braylon Roberson (6-0, 218, Jr.) will be jumping into the other linebacker position.