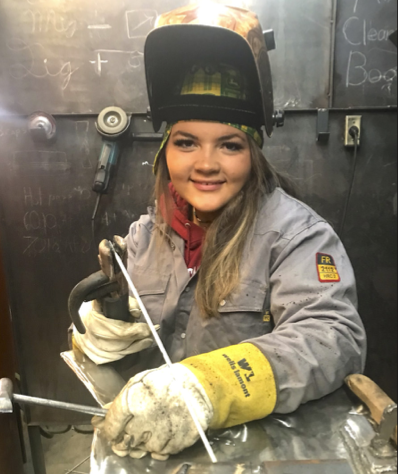 In times gone by Braggs junior Maddie Dishman might have been known as a tomboy.

“I’ve always gotten along better with the boys than the girls. I come from a family with four sisters and a brother, and my older sisters are all nurse aides, so I just wanted to do something different,”

And that’s one reason that Dishman enrolled in the combination welding program at the Indian Capital Technology Center in Muskogee. Maddie says she fits right in with a class and a profession generally dominated by guys.

“I wanted to be part of the few girls who do it, but I mainly like the idea of the money you can make,” explained Maddie who at Braggs plays volleyball, softball and basketball for the Lady Wildcats and is hoping to get a skeet shooting team started in the near future.

The newly re-named Combination Welding program at ICTC is a two-year program taught by first-year instructor Josh Chitty from Gore, who himself is a former student of the program.

“After I left ICTC I went out and got a job and have done pipeline welding most of my career until deciding to come back and teach the course myself. The students here learn and have to pass all of the safety tests and by the time they’re done they should have their 3G and 6G certifications.”

“Once they graduate these folks have lots of opportunities from working in a shop somewhere where you can $13-$18 an hour or more to traveling and working in industrial or pipeline settings where you can make as much as $200,000 a year.”

Dishman says there are challenges in the program like learning to vertical weld but likes the hands-on training they offer at ICTC which is how she learns best. Maddie isn’t quite sure what will happen after she graduates next year but thinks the welding skills she learns will come in handy.

“I’m thinking I might go to Connors State and get into the rodeo program, but I also want to stay involved in welding whether I decide to do something like pipeline work or even just to be able to help my dad out with projects.”